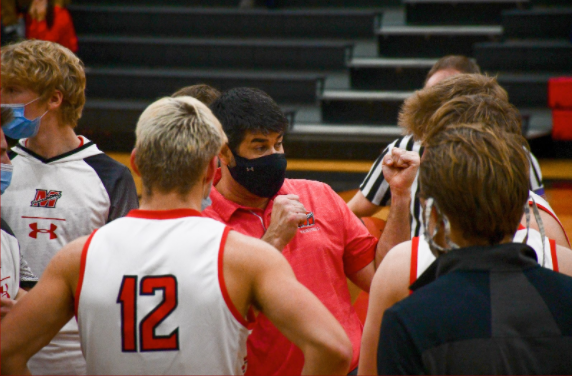 Coach Capes instructs the team during a time out in the first period.

By the first time out, the game was close with Kettle Moraine winning by 2, at 17-15. As the game went on, both teams put up a great fight. There were many spectacular plays from both sides, causing a tense crowd and banter from Coach Capes and Coach Schultz from Kettle Moraine.

By halftime, the score was 35-24, kettle moraine leading. After the lovely halftime show from our Muskego poms team, our Warriors went right back on the court with their heads held high, and their spirits higher. Starting with the same five from the first half, our warriors were on fire, with three-pointers coming from both Wohler and Baraa. As the game got tenser, so did the coaches. With more amazing plays from both teams, it felt as if the hoops were getting smaller and smaller– not many shots were being made.

With 10 minutes and 50 seconds left in the game, Muskego was down by 10 points at 45-35. With free throws from Luke Baraa, that seemed as if it was a second wind for not only Luke but the rest of the team as well. With less than 5 minutes left in the game, number 12, Dylan Krause gave us one more three-pointer. Seeing appearances from Jake Brandstatter and Louie Schwabe, all of the boys fought until the very end of the game, whether they were on the court or on the sides. Coaches giving all of their tough-love to their players and hearing motivation from our warrior parents. That is all that was needed to keep our warriors going.

With only 59.4 seconds left in the game, the score was 65-52, kettle moraine. But, the team did not give in. We played until the buzzer sounded, and even then, it didn’t make the team lose hope. Although we lost this game, there is always next time to show what we’re made of.